This story appears in the Nov. 14 issue of ESPN The Magazine.

Under the bright LA morning sun, Leticia Bufoni tugs on the sleeves of her fitted black leather jacket. Her long brown hair is wrapped in her trademark black bandanna, an ode to her favorite rock star, Axl Rose. The 18-year-old Brazilian mounts her skateboard and sails off a three-foot-high ledge. She whips her board 360 degrees beneath her -- a trick called an inward heelflip -- teasing at the ability that has her pegged as the future of her sport.

Bufoni is just one of a wave of skaters -- including fellow Brazilians Jessica Florencio, 20, and Eliana Sosco, 24 -- who aim to make women's skating relevant in the ever-growing action sports landscape. But with her deep arsenal of moves, aggressive style and marketability, it's Bufoni who's most likely to usher the sport into the mainstream. Since 2007, she's snagged X Games silver and bronze in Street, a style of skateboarding that mimics an urban landscape with rails and ledges. In 2010, she won the Maloof Money Cup and its $25,000 prize. This year, she's ranked No. 1 in Ladies World Street by World Cup Skateboarding, the sport's global body. "She's got the talent and the attitude to be a huge force in our sport," says Elissa Steamer, 36, a four-time X Games Street gold winner.

The 5'3", 108-pound Bufoni is carrying the torch from an older generation, including Steamer, that has clawed for the incremental increases in popularity the sport has enjoyed. In 1998, women's skateboarding debuted at the X Games as a demo. Five years later, it landed in the lineup as an official event. Since then, core action sports brands have added women's skate lines, including Element, DC Shoes and Volcom, which is one of Bufoni's sponsors. Between her multiple deals and prize money, the skater can earn upward of $100,000 annually, the high end for a female skater.

Bufoni seems completely unaffected by her success, though. She's a typical teen who likes to sleep in on Saturdays, go to the movies and trade texts with her friends. She pouts about doing the dishes and taking out the garbage. She also plays the drums in a punk group called As Catantes (the Hookup). "We sing about boys, humor and life," Bufoni says.

This is not to say she doesn't take her sport seriously. Far from it. A fixture of the city's thriving street skate scene, she often leaves her downtown apartment before 10 a.m. to hit spots in half a dozen neighborhoods. It's not unusual for her to skate at the Volcom Warehouse until 4 in the morning.

"The boys give her respect," says Ana Paula Negrao, her manager and friend. "Sometimes she upsets them because she's so good."

In 2007, Negrao, a former pro skater, first spied Bufoni's potential at a skate comp in Brazil and encouraged her to relocate to the States to increase her exposure. With her father's permission, Leticia moved to LA to live with Negrao, who helped arrange a work visa and sponsors. After Bufoni's X Games debut in 2007, she traveled to high-profile contests in Argentina, Prague and London. The rest is history in the making. "She's the future," says Patty Segovia-Krause, founder of All Girl Skate Jam, which helped popularize women's contests in the early '90s. "Leticia is someone who will carry women's skating."

One trick at a time.

Chris Palmer is a contributing writer for ESPN The Magazine. 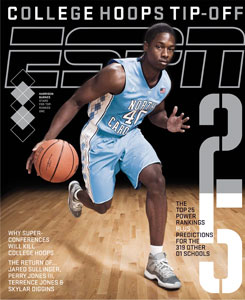