Posing nude is just another challenge for me. I challenge myself on my bicycle every single day. It kind of goes hand in hand with what I do as a competitive athlete.

My shins are so jacked up. We call them "shinners" -- when you don't land properly and the pedal snaps back and hits your shins. For years my mom would say I would never find a wife with shins like that. But it's just part of my body that I've given to my sport. Just me giving my love to my art. But yeah, they are pretty jacked up.

Sometimes when I'm riding it feels like I'm in The Matrix. Everything just slows down and I'm able to dodge bullets and whatnot. It's such a dope feeling.

BMX riding breaks down racial perceptions. Coming from New York City and being a BMX rider, that isn't something that's too common. I feel like for the longest time, I would ride through certain neighborhoods and people would call me a "white boy" because they associated white boys from California with BMX riding, and it bugs me so much because I'm completely not that. I completely don't fit that mold. It's really important for me to bring BMX riding to the masses and show people exactly what it is.

I want to have Obama on a BMX bicycle riding around NYC one day.

I'm just as in love with bicycles today as I was when I was 6 years old. We had this Big Wheel, and I was just a really hyper kid, just an adrenaline junkie at a very early age. I had seen my older cousins go super fast on their bikes and do skids, and I would try to mimic what they were doing on the Big Wheel. They saw me doing it, and they were like, "Damn, that's crazy!" I fell in love with bicycles that day.

It feels more natural riding my bike than walking sometimes. I feel like the bike is a part of me. It's been a part of me for so many years that it's become my ultimate comfort zone.

I can bob and weave through traffic in any city, no matter where it is in the world. But you have to know what the bike is going to do in any given situation. Last year I was coming down Broadway going super fast. There were about 20 of us, and I was flying as fast as I possibly could, and this bus was coming across and I thought I could dip in front of the bus, and I'm like, "I'm not going to make it." The only thing I could do was jump off my bike and let my bike slide underneath the bus. Luckily the bus stopped in traffic and didn't run over my bike, but I let the bike go underneath the bus and I was actually still holding on to the handlebar with the bike underneath the bus. I live for moments like that. 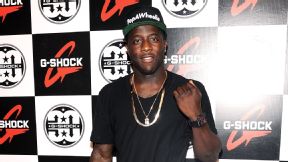 BMX riders are not daredevils at all. Everything I do is calculated.

My body is a direct reflection of what my bike has given to me over the years. I'm not the type of person who would go to a gym and work out, but BMX riding for me is a full-body workout. Every time I bunny hop on my bicycle, I'm lifting up the bike, which is about 23 pounds in addition to my entire body weight. On a regular day, we're bunny hopping a couple hundred times.

Music is the No. 1 key for me. When I ride with music on, it blocks out the city sounds around me, and then from there I zone in. I'll actually ride to that beat. It will dictate my riding and the tricks I'll do.

One of my favorite songs is Jay Z's "U Don't Know."That song kicks in pretty quick, so right when he starts rapping, I'll go and try to do a trick. So I'll start off 15 or 20 feet away from the actual obstacle that I'm going to perform a trick on, and right when he starts rapping is when I'll pull off, because it just feels right at that moment. I feel like I'm part of the music.

I was a real small kid. I would get picked on by older kids and stuff like that. My mom was always scared for me. I always felt that I had to outwork everyone around me to prove a point. So maybe that's part of the reason I'm where I am now -- kind of that Napoleon thing, you know.

You don't want to be known as that dude who punks out all the time. You have to overcome fear, you have to use fear to your advantage. You have to manipulate fear and go out and land those tricks. That's what we do it for.

Besides, punking out will eat at you all day. It eats at you until you're able to go back to that spot and try that trick again and land it.

I think one of the biggest turning points in my life was when I broke my wrist on my 19th birthday. It was one hell of a birthday gift. I turned professional at 18 years old, and a lot of things came at me all at one time. Things were moving very fast, and I was careless. I had no choice but to slow down for six weeks and to really think about my life and what I was going through at that time and the people I was hanging around and the direction my life was headed in. It was a blessing in disguise.

It's all about repetition, man. I've watched a lot of interviews, and all of the great athletes -- Michael Jordan, Muhammad Ali, LeBron James -- they always talk about repetition and practice. I'm on a bicycle every day, and being one with the bicycle -- knowing how the bike is going to move, knowing how my body is going to react depending on the type of bike it is -- has helped me avoid major mishaps.

I eat way too many chocolate-chip cookies. I got to cut back on those.

But riding is a full-day workout. In one day we may start in Brooklyn, go to Harlem and ride back to Brooklyn, and in between that journey we're stopping at different spots and doing tricks. So I might be able to get away with a couple cookies.