The Pastranas strip down for The Body Issue

It's a very fine line between brave and stupid -- and I've crossed it a lot. But the success of what I do is being willing to understand risk. That's the Nitro Circus. It's kind of a group that's aware of what our abilities are. We get it wrong a lot, but we're at least close.

I'm slowing down in the injury department. This year I just broke my tibia, fibula, a few concussions, dislocated ankle and two broken ribs -- so that's a pretty good year!

My father told me I couldn't get a motorcycle until I could ride a bicycle down the stairs. He was trying to buy himself another year. A couple crashes later I went down, and he's just like, "Oh jeez, now I have to get my kid a dirt bike."

I come from a crazy family. I had two uncles who were boxers, my granddad was a Golden Gloves boxer. My uncle, Alan Pastrana, was a quarterback for the Denver Broncos back in the late '60s. And I was the runt in the family; I couldn't run, I couldn't throw. The only way I could keep up was by jumping and doing flips. That's how I got into action sports.

All my uncles were jumping off a bridge into water. I was maybe 3 or 4 years old -- it wasn't that high, maybe 35 feet, and I said, "Dad, I want to go up." He said: "I don't know if you're ready for that. If you go up you have to jump." I got to the top and I started crying and he pushed me off. I landed and everyone was cheering. Pretty much after that, I was the first one jumping.

I've never thought about my appearance. My wife has never either. I mean I'm sure she has because she's a girl, but Lyn-z looks in the mirror and says, "Damn, I look good." I think that's the confidence of knowing that you're just tougher than everybody out there. 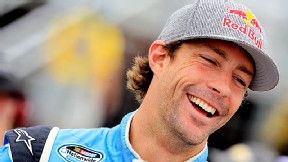 More on Travis
Bane: Travis Pastrana doubles up, doubles down »
ESPNVideo: Pastrana Back on Two Wheels »

Any motocrosser can take a huge muscle guy in pullups. My core is really, really strong. Especially with freestyle, a lot of the tricks where you get way off the motorcycle, you're pulling your entire body or the entire bike around and you just have to have a lot of core. Most motocrossers don't look as strong and tough as they are.

I'm scared of everything. I think that makes life fun. If you're not ever afraid of anything, then what fun is it? Everyone says: "I want to fly. I would love to be a bird," but f--- that! There is no risk. You have to have that fear of falling to make it exciting.

I legitimately put in 20 miles, three or four times per week. It's just my base training. I like to do it before Lyn-z gets up. It's just my time.

In 2000, the backflip was unheard of. Now it's like your warm-up trick.

The biggest challenge is mentally wanting to do stuff but having limitations. I feel like if you put someone like [BMX rider] Mat Hoffman, [skateboarder] Danny Way and myself and gave us the body of what we had when we were 14-15 years old, we could really set the world on fire right now. But that's just not an option.

I literally can't lift any weight on my calves at all. I shattered my right ankle two years ago and as I was just getting back, I dislocated my left ankle and broke my tibia and fibula. So literally I can't do a calf raise with either foot. They just don't work. The funny part is that everyone's like "Oh, do a flip" and I'm like "I can't get three inches off the ground on my legs right now. Give me a trampoline and I'll do a triple flip."

I'm a sissy when it comes to stubbing a toe. My wife will tell you I'm actually really bad to deal with after an injury.

I hate falling asleep on planes. One time I fell asleep before the plane took off, and right as we're about to take off down the runway I woke up [and ran] full sprint from the front of the plane to the back of the plane, screaming. I have no idea what I was dreaming. They had to hold the flight on the runway. It's a little embarrassing.

Pain sucks. Some people tolerate it better than others, but when it's really bad, you'll pass out. The pain of a broken bone isn't really that big of a deal. It sucks, but it's like that's the life you've chosen and if you don't like the pain, go do a desk job. I would shoot myself if I had a desk job.

I've lost a lot of my durability. I had 40 fractures over seven bones on my right ankle. Everything is fused together so I'll never have the articulation in that ankle. And I don't have any cartilage left in my right knee.

And I've lost a little bit of flexibility. My back was the most life-threatening injury. They fused together my SI [sacroiliac] joint, which ironically they say is the key to your balance. But I do a stretch routine every night before I go to sleep. It's something I have to do or literally I can't sleep at night.

I'm fused perfectly for a dirt bike, though. My back is fused so that when I try to stand up straight my butt sticks way up. It's pretty funny. But it's great when I'm riding a dirt bike, so it's probably helped my career. Or cars, hell, perfect!

It's not cheap. The [health insurance] premiums are ridiculous, but rightfully so. I can't complain.

It's cool to see other couples who understand what it's like to be an athlete and be a partner. We enjoy our jobs as athletes and we're fun. And I guess we're not afraid to get naked in front of the camera.

It definitely took some convincing to get Travis to do it. He was like, "All right, well as long as we're both naked -- then I get to see you naked." He's a good husband.

I didn't get the memo. Doctors mentioned something about waiting six weeks [to work out] after giving birth. By about two weeks, I was on a mini ramp in our backyard. For me, it was almost a fun challenge to see how soon I could be back on the board. 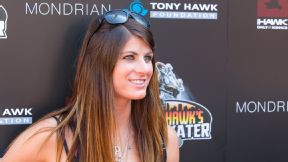 My parents let me be independent and creative in my lifestyle. That was definitely helpful. My mom told me I would climb up to the top of the swingset and hang off of it. Other parents would say, "How are you going to get her down?" And her response was: "Well, she doesn't want to fall, so she'll figure it out."

I got my first skateboard at about a year and a half old from my parents. My brother and I got them for Easter, so I've been around it my entire life. When I was around 10, I got into skating seriously and stopped doing traditional sports. By 12, I had competed in my first pro event, and I was hooked.

I don't really worry too much about Travis. But there are definitely things that he still wants to do that I pushed for him not to do, like base jumping or certain tricks in moto. I don't want him to change who he is or what he does, but sometimes I have to remind him of what there is to lose now.

I wish I had worn better shoes at a younger age. My feet always hurt, and I think that's a product of wearing skating shoes my whole life; there's no arch support. The thing about it is, you want to be able to feel your board, because your feet are really what's in control. As a skater, you don't treat your feet very well.

I remember skating when I was 12 or 13, and a boy asked me, "Are you a boy or a girl?" From that point on, I was even more diligent about portraying the fact that I'm a girl.

I thought I had such a high pain tolerance. But childbirth is just excruciating pain. Originally I didn't want an epidural, and I waited more than half my labor without it, and then I just caved. It's very intense. Everything just seems so trivial after that.

I thought my body would have changed more. I imagined that my hips [would be] a little wider. I was definitely surprised how your body can bounce back from something like that.

My training has changed. Now I stroll around with Addy listening to books on tape, just kind of having a mellow aerobic workout. I listen to a lot of series like "the Hunger Games" and "Divergent." Also, I enjoy swimming laps a lot.

We have this unique training thing. Travis and I pick a movie and do cardio while watching it. It's kind of like normal people sitting on the couch watching a movie, only we do it while cycling or riding on a treadmill.

I just like that I feel strong and comfortable with my body. When I'm in good shape, I just feel better all around. Every day you wake up feeling better, you go to bed feeling better, everything that you do in your life is just a little bit easier when your body is working well.