See the base jumpers in action. Gallery

IT'S NEARLY MIDNIGHT on Veterans Day at an undisclosed military base in the Middle East, and Master Sgt. Aaron Winward is waiting for an autograph in a line that once stood 400 deep. The temperature has yet to dip below 100 degrees, but Winward is not about to pull chute. He's still in awe from what he just saw -- a two-hour Bikes Over Baghdad show featuring BMX pros sending backflips over the heads of high-ranking officers. "When I look back

Since the first Bikes Over Baghdad tour in 2009, pro BMX riders have come home with tales of ducking mortar fire and riding in Saddam Hussein's bombed-out palaces. Although this November trip was incident-free, it did strike a visceral chord for BOB founder Christian Schauf and nine riders. Says Chad Kagy, who performed in two shows and several smaller events on the six-day tour, "This is one of those pinnacle moments I'll never forget."

The feeling is mutual.

By: Alyssa Roenigk
Alyssa Roenigk is a senior writer for ESPN The Magazine and ESPN.com whose assignments have taken her to six continents and caused her to commit countless acts of recklessness. (Follow @ESPN_Alyssa on Twitter). 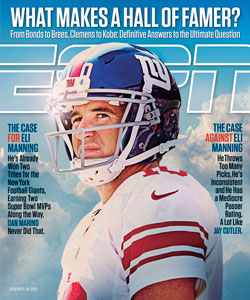 MORE FROM THE HALL OF FAME ISSUE

new visuals for this one https://t.co/dK2Sldlagi

RT @phantoms: When your boys play you on the livestream @DillonFrancis @diplo https://t.co/iuS0Jiyr3G