This story appears in ESPN The Magazine's March 18 One Day One Game issue. Subscribe today!

IT'S A SOGGY February night at the FIS World Cup outside of Sochi, Russia, and Kelly Clark has just suffered through her worst practice in years. Five times she attempted a variation of the run that won her a gold medal in Snowboard SuperPipe at X Games Aspen in January, and four times she crashed, catching an edge in the halfpipe's soft snow. Falling once is uncharacteristic for this seven-time X Games champion. Falling four times in one pre-finals practice? That doesn't happen. Clark is one season removed from a 16-contest win streak -- the most dominant stretch ever in women's halfpipe snowboarding. But the 29-year-old arrived in Sochi in the middle of a 1-4 slide, her only win coming by way of a 0.33 margin over Elena Hight at Aspen.

Kelly Clark weighs in on her recent success in her espnW.com blog. Athlete's Life »

Now with that disastrous practice session not even an hour old, she stands atop the halfpipe -- on the same snowboard, in the same crummy conditions -- and peers down the barrel of her first finals run. If this day has reminded her of anything, it's that Sochi isn't Aspen. And that practices aren't prophecy. "A few weeks earlier, I had the best practice I've ever had and then tanked both finals runs," Clark says. "It turns out all that matters is your contest runs. I don't need to start finals thinking about what I failed at in practice. I need to think about what a great opportunity this is to gain experience."

She's talking about the type of experience that prepares her for contests like the X Games stop in Tignes, France, March 20-22. Today's event is also a chance for Clark to test herself under conditions she will likely face in Sochi next February, when she hopes to compete in her fourth Winter Olympics. Clark debuted with gold at Salt Lake City in 2002, finished fourth at Torino in 2006 and took bronze four years later in Vancouver. Sochi could be the Vermont native's last chance to bookend her career with Olympic gold.

To understand how much that would mean to her, it helps to understand how she looks back on her first three Winter Games. "I can't say my Olympic gold medal cost me very much," Clark says. "But my bronze from 2010 cost me a lot. I know how many times I had to get up and deal with my disappointment from Torino."

In 2006 Clark was in third place before her last finals run. She knew she could scale back her tricks and land on the podium. But instead she stuck to her plan and attempted a huge frontside 900 on her final hit, only to catch an edge and fall. She left Torino without a medal, but her run at the time was heralded as the most progressive in women's snowboard history. Her disappointment came not from the loss but from failing to land the run she went to Torino to land. And when she returned to the medal stand in Vancouver, it was all the sweeter because she was proud of her run. "The perspective I gained in 2002 was incredible, and 2006 was really defining," she says. "But that bronze in 2010 is more valuable."

At competitions where she doesn't win -- like the 2012 Burton U.S. Open when Hight snapped her 16-win streak -- Clark has learned to appreciate the small gains, the personal victories. She says she measures success by learning new tricks, holding grabs longer and dialing in her runs. The self-described introvert also focuses on setting less obvious long-term goals, including strengthening basic skills like edging (her biggest challenge in slushy Sochi). This outlook has helped the 5-foot-4, 135-pound Clark improve her amplitude (she boosts 14 feet above the 22-foot superpipe) and, in turn, introduce tricks into her competition runs that no other woman could. "If you could overlay her runs with those of the other women," says head X Games snowboard judge Tom Zikas, "she would actually be airing over every one of her competitors. It's night and day."

As Clark has become a veteran voice in women's snowboarding, she has started looking at the bigger picture. For her, that means advancing the sport of women's snowboarding by closing the degree-of-difficulty gap with the men and by setting a higher standard for the next generation of women.

Dialing back is not an option. Not even now in Sochi, as she prepares to attack the halfpipe that has turned to slush, with four of the five women who've beaten her in the past year -- Hight, Kaitlyn Farrington, Torah Bright and Jiayu Liu -- waiting alongside her. Clark doesn't scale back her finals run from the one that sent her to the ground in practice. She ratchets down her bindings, tugs her goggles around her helmet and drops into the pipe. Despite the sloppy conditions, Clark nails her run, twice, and is awarded a high score of 88.25, 10.25 points ahead of second-place finisher Holly Crawford.

The next day on the flight home to Mammoth Lakes, Calif., her body sore from the beating she put it through in practice, Clark smiles as she thinks about the bruises that will surely greet her upon arrival. They're just little reminders to always stick to the plan.

By: Alyssa Roenigk
Alyssa Roenigk is a senior writer for ESPN The Magazine and ESPN.com whose assignments have taken her to six continents and caused her to commit countless acts of recklessness. (Follow @ESPN_Alyssa on Twitter). 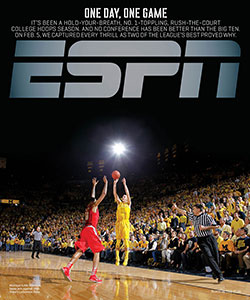 ONE DAY ONE GAME ISSUE FEATURES

ONE DAY ONE GAME GALLERIES

MORE FROM ONE DAY ONE GAME