How close is my state to legalizing sports betting?

By Ryan Rodenberg | Jun 28, 2018
Movement toward legal sports betting hit a fever pitch during the first part of 2018. No fewer than a dozen states introduced or reintroduced legislation that would legalize some form of sports gambling.


All of the activity happened while the Supreme Court was considering whether to strike down the partial federal sports betting ban contained in the Professional and Amateur Sports Protection Act (PASPA). The case pitted the state of New Jersey against the NCAA, NBA, NHL, NFL and MLB. The Garden State prevailed, as the Supreme Court struck down PASPA and greased the wheels for even more states to enter the fray.

Simply put, the political environment for sports betting legalization has seen a seismic shift of late.

To measure the change in the landscape, ESPN Chalk ranked all 50 states and the District of Columbia in terms of how likely it is for each jurisdiction to join Nevada in offering a full scale of legal sports betting options.

No longer the only state to permit a wide variety of legal sports betting, Nevada is a mature market that has existed for decades. Many states might look to Nevada for the best practices in the regulation of sports betting. Nevada could even be designated as a national hub of sorts, via agreements with other states on topics such as oversight, liquidity, line monitoring and risk management.

On June 5, 2018, Delaware moved to offer single-game betting on a number of different sports at three casinos in the state. Expanded sports wagering options could take place at additional locations or online in the coming months. Delaware's authorization of what Gov. John Carney described as "a full-scale sports gaming operation" happened less than a month after the Supreme Court ruled that the federal law restricting single-game betting to Nevada was unconstitutional.

On June 11, 2018, Gov. Phil Murphy signed the sports betting that had passed the previous week. A William Hill sportsbook is set to take bets Thursday, June 14 at 10:30 a.m. ET. Other sportsbooks in Atlantic City will offer sports betting as well.

All of these states either already have enacted state laws to allow sports betting or have fast-tracked legislation, with hearings already having taken place and, in some cases, advanced beyond the committee stage.

Each state has introduced kick-starter legislation (or publicly announced plans to do so), with hearings and votes on the bills moving forward at different speeds.

Existing laws that could be expanded

Both states have laws on the books that permit some form of sports betting and probably could be widened in scope, if lawmakers are so inclined. The Oregon Lottery offered its pick 'em-style game for years before mothballing it about a decade ago. The Montana Lottery currently offers a fantasy-type sports pool for football and auto racing.

No legalization activity ... yet

All states in this category have laws that prohibit Nevada-style sports betting. Such laws would need to be repealed or amended before full-scale sports wagering would be permitted. These states do not have any publicly announced bills devoted to sports betting legalization.

Utah's anti-gambling stance is written into the state's constitution. Any change to existing state policy toward gambling would be a massive departure from decades of opposition to any form of gambling, including lottery tickets, table games and sports betting. 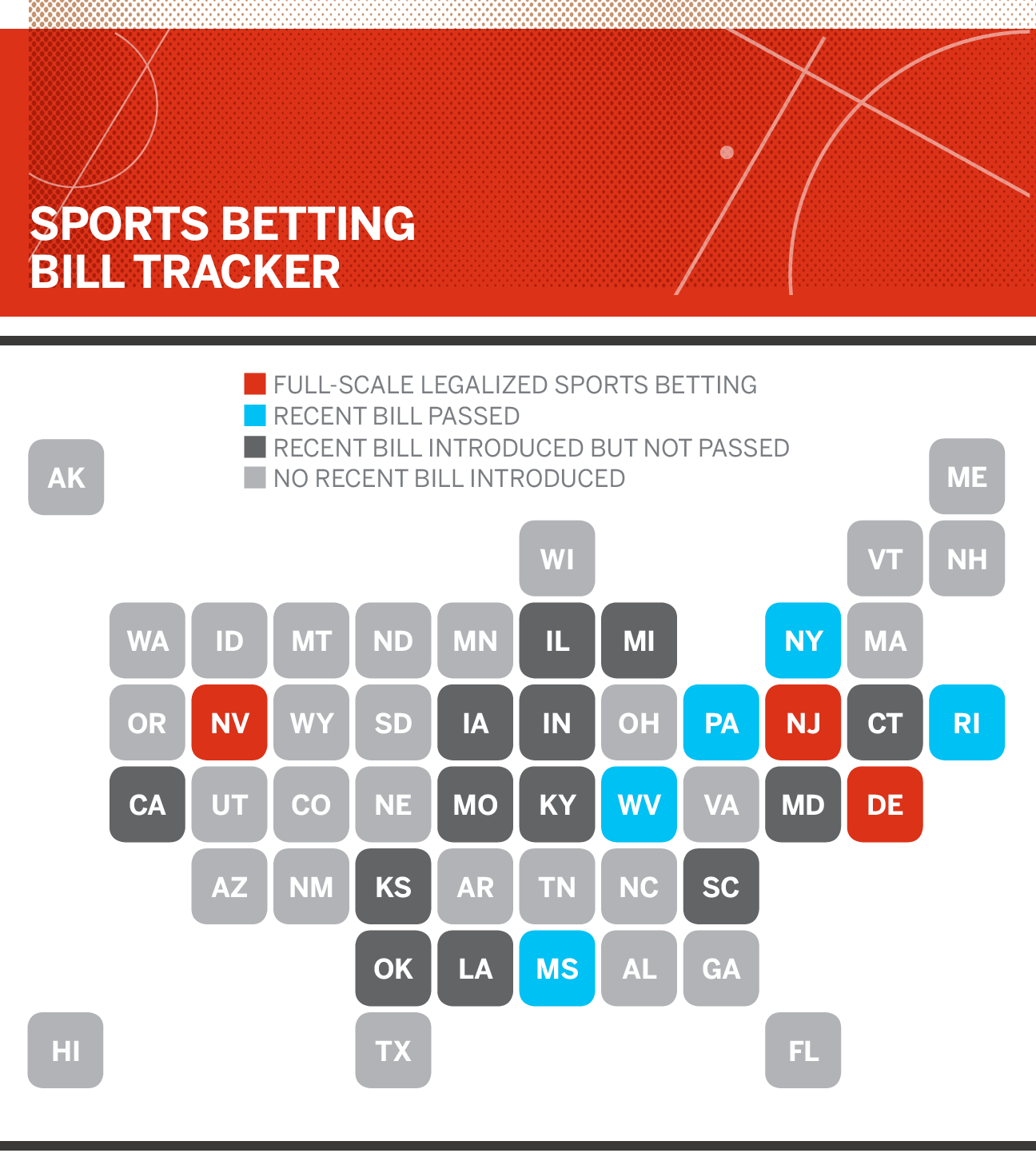