This story appears in the June 25 Debate Issue of ESPN The Magazine. Subscribe today!

WHEN THE X GAMES hosted a freestyle motocross competition for the first time in 1999, a 15-year-old Travis Pastrana took first place by performing an electrifying 90-second run filled with tricks that, today, no self-respecting rider would bother including in a warmup. Compare that with ice skating's triple axel: 53 years after it was first recorded in 1957, Evan Lysacek included it in his gold-medal-winning Olympic routine.

The reality is, most freestyle motocross tricks have the lifespan of a pet hamster. The sport's stars have always been pioneers, guys willing to sacrifice their bodies to be the first to land a trick. Their constant one-upmanship moved the sport ahead at hyperspeed, from its first competition backflip (Carey Hart in 2000), to back-to-back flips (Mike Metzger in 2002), to 360 (Brian Deegan in 2003), to double backflip (Pastrana in 2006). The price for that progress was a gruesome tally of broken bones, ruptured organs and concussions, all of which riders say was worth it. "That was the

But like many of its young competitors, the sport grew up too fast but never matured. Tricks became so complex and so dangerous, it's become impractical for riders to invent a new trick in the short time between contests. "The limits have been pushed so far, something has to give," says 2011 X Games Moto X Freestyle silver medalist Adam Jones. 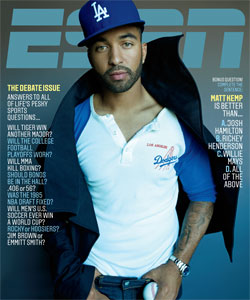 MORE FROM THE DEBATE ISSUE

RT @sebasschinn: Live streaming right now with Joey and Cade. Come hang out. We’ll be answering any questions you have about music, tourin…

RT @BBCR1: They're not finished yet - join us for the 2nd hour of @Diplo and Friends with @ProjectParadis going strong! They draw for eve…

RT @BBCR1: Now on @Diplo and Friends @mrcarmack & @promnite step up to the decks for a 2 hour special with their joint project @ProjectPara…